The Ascent Mutual Dependencies: Kill the Fullchromes bug and how to fix

The Ascent Double Charge quest: How to use Stasis Overcharge

The Ascent Lost and Found mission: How to find Taoka at Dream World

The Ascent The Stash mission: How to find Linus Pizza Palace and unlock ICE 1 door

Tribes of Midgard Golden Egg: How to get the Golden Egg rune

Bethesda is bringing custom servers to Fallout 76, which will allow players to build as much as they want – if they’re subscribed to the premium Fallout 1st service.

Players have been asking for private servers in Fallout 76 since the game launched back in 2018, more or less, and after they were added in 2019, players have been requesting that Bethesda make them customizable. After months of pressure and myriad fan requests, the company is finally adding those options to the game, for paying players.

Starting in September, players on private servers will be able to customize their experience and alter server rules to suit the way they play thanks to a new system called Fallout Worlds.

“Combine unlimited combat AP and infinite ammo to become a mighty wasteland warrior, configure creature spawns for serious big game hunting, control weather effects such as fog, nuclear radiation, or even Quantum Storms, turn on absurd jumping heights (just remember to turn off fall damage), enable ragdoll physics, change the height limit on settlements… all this and more are yours to play and experiment with as you see fit,” said Bethesda in an announcement.

“Utilizing a wide list of customizable settings, players can construct C.A.M.P.s in previously restricted areas or even remove the need for electricity to establish a builder’s paradise.”

For all intents and purposes, it sounds like Fallout 76 is getting a ‘creative mode’, then. Just be aware that any progress made by your characters in Custom Worlds will remain separate from progress made in Adventure mode.

It’s a shame all this fun will be kept behind the expensive Fallout 1st service, then. At least Bethesda is trying to justify the cost by offering players a curated set of Public Worlds which it describes as a “rotating series of Fallout Worlds experiences available to all players”.

Still, given that Fallout 1st goes for a yearly fee of $99, it’s probably a little hard to swallow for people that paid full price for the game and don’t want to subscribe. 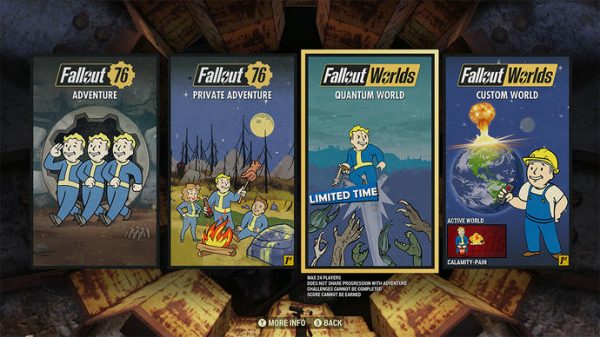 Ubisoft’s Skull & Bones has entered alpha stage, but it’s taken eight years to get there