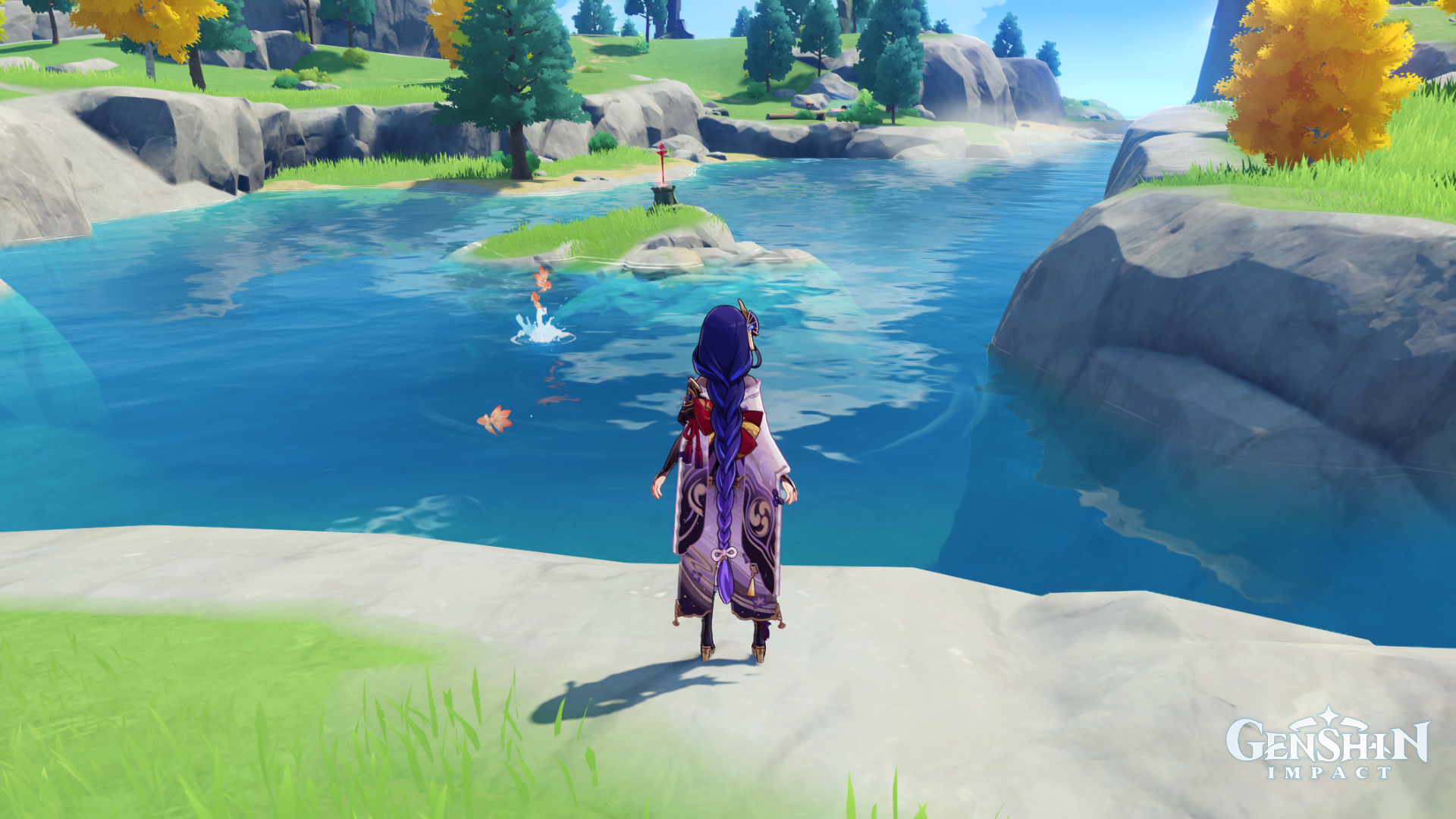 It’s an expansive system with fishing spots dotted across the entire world. You’ll need to fish quite a bit to unlock some of the more advanced bait, though.

The fishing system is only open to those at Adventure Rank 30 or higher. You’ll also need to complete the initial Serenitea Pot world question that opens before the Inazuma prologue. Finish that if you haven’t already.

Travel to Mondstadt after downloading the Genshin 2.1 update, and speak with Katheryne at the Adventurer’s Guild. This starts a short quest that’s basically a fishing tutorial. Follow the prompts, and speak with Nanuck to learn the basics. He’ll also give you a basic rod and some basic bait.

You can collect additional rods themed after each region by speaking with the Fishing Association representative of that nation and exchanging certain fish for the new rod.

With rod and bait in hand, find a fishing spot, and cast your line. If you’re using the right bait, a fish or two will approach the lure and bite.

Use the fishing button to keep the meter in the yellow box until you’ve caught the fish. Staying outside the box too long will eventually snap the line.

Genshin has four bait varieties, each suitable for a different fish type. You can craft it after obtaining the bait recipe from any Fishin Association.

There’s more than 20 fishing locations throughout Teyvat. Right now, it doesn’t seem as if these are specific to normal fish and decorative fish, so you’ve got equal chances of it being either when you approach a spot.

You can technically scare fish off if you start a fight nearby, but it takes a lot to frighten them. I fought a group of Hilichurls right next to a rippling spot, and the fish only fled because I accidentally electrocuted the water.

If you frighten them away, you can teleport away and come back to force a respawn.

There’s meant to be a third location in front of the city, but it didn’t spawn for me.

Some found a ripple spot in the pool on Mt. Aocang, though that one also didn’t spawn for me.

The spot east of Tatarasuna is a difficult one to handle since it’s swarming with Cryo Slimes and an Electro Abyss mage. The flurry of attacks frightens fish off easily, so your best bet is sailing here, dealing with the enemies, teleporting back to the island to your west, then sailing out there again.

It’s still a bit early to tell when fish respawn after you catch them, but the usual 24 hour reset time seems to be the general rule.

That’s everything you need to know about Genshin Impact fishing. If you’re still working your way through Inazuma, we’ve got detailed guides on all its biggest quests, including Sacred Sakura Cleansing and Tatara Tales. If you’re short on Sakura Bloom for fish bait, we’ve got you covered there as well.

Who Is The Hunter In Marvel’s Midnight Suns?